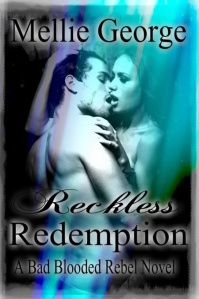 I read my first Mellie George novella, Rebel: Bad Blooded Rebel Series after reading and loving Terri Anne Browning’s The Rocker series. I really enjoyed what I read! The second BBR novella was out as well, so I quickly bought that one too. Then the wait was on for the next two Ryder and Everleigh books! In that time I also bought and read her other works, Say Yes and Back To Life. I enjoyed both as well.

Recently she published Reckless Redemption: A Bad Blooded Rebel Novel. Since today was supposed to be release day (she hit publish early), we decided to feature both her new release, Reckless Redemption, and Say Yes which is currently on sale in honor of its one-year birthday.
-Kim and Jennie 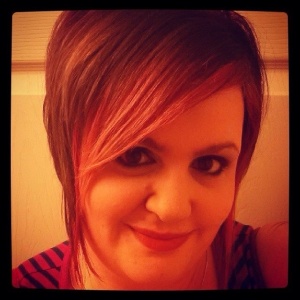 Mellie George is self proclaimed True blue Indiana girl, who is married with 3 beautiful daughters. In addition to being a self published indie author, she is also a hairstylist that loves her day job.  She loves writing and is a total book addict that reads as much as she can.  She is the author of Say Yes (Glenbrook Girls Series), Back To Life, and The Bad Blooded Rebel Series. She has more books in her to write and hopes to have all of you along for the ride!

How do you get back a love you thought you’d lost? If you have it, will you do whatever you can to keep it?

Beau Cavanaugh had lived a hard life before becoming famous as the lead guitarist of Bad Blooded Rebel, a band he formed with his childhood friends Ryder Matthews, Kris Engle, and Jude Miller. He thought he had it made when they hit it big…tons of money, endless parties, and countless girls willing to throw themselves at him for a night in his bed. However, when he meets a beautiful blonde back stage at one of their hometown shows, his life changes for good…and bad.

Danni Sharpe has been a Bad Blooded Rebel fan from the beginning and had always had a thing for their lead guitarist, Beau. She could barely contain her excitement when she meets him backstage at a show and when he kisses her before she leaves, she instantly melts into him and sparks fly.

Their attraction is instantaneous and they soon fall into a “friends with benefits” relationship with neither one willing to admit their feelings were starting to run deeper and lines were beginning to blur. When an event happens in New York, Beau falls into a deep depression and drowns his sorrow in alcohol after hurting Danni deeper than anyone ever had.

After a desperate call, Danni moves to be closer to Beau and help save him from himself, but is her presence alone enough? Can they work out all of the past hurt and find love again?

THIS IS A CONTINUATION OF THE BAD BLOODED REBEL SERIES OF NOVELS! YOU MUST READ REBEL, ROGUE, RENEGADE, AND REDEEMED FIRST!

Kim’s Review:
Reckless Redemption Review
I could not wait for this book to come out, and I was not disappointed! It is a continuation of the Bad Blooded Rebel novella series, as Beau and Dani’s relationship started there. While in New York however, miscommunications happened and hearts were broken.
Beau fell into a depression and drinking. Dani was the only one able to get him out of it and get some help. They both loved each other still, but the hurt was deep.
This book had less drama and angst than the first, but I enjoyed how the author took the couple from friends, to lovers, which led to broken hearts, healing and finally getting back together.
Beau stole my heart in this book as a transformed bad boy playboy rocker who fell hard when he fell in love. I enjoyed his transformation!
I love how all the other characters and band mates are very interwoven with each other, and I cannot wait for more of the Bad Blooded Rebel’s stories to come out!

As one of the biggest fans of the Bad Blooded Rebel series (if I do say so myself) and an even bigger fan of the amazingly awesome Mellie George, I could not wait to get my hands on Reckless Redemption. After all the angst and drama Ryder and Everleigh went through to get their happy ever after, I was dying to find out what happened next. Not only with their story but with Danni and Beau’s as well. Would they finally find peace and happiness? Or had their mistakes caused so much pain and damage they could not be repaired?

Reckless Redemption grabbed me from the very first sentence and didn’t let me go until the very last! I cannot get this story out of my head, and honestly I’m not sure I want to just yet. This is the story of Danni and Beau; it’s everything that happens AFTER the NYC drama. I do not want to give away any of the plot, I think readers need to experience it for themselves, and I will not spoil the fun for anyone. However, I will say that the book is filled with emotion. I shed plenty of tears, I laughed often and I almost always had a smile on my face. My heart raced when the story got angsty and I love that feeling. That’s when I know I’ve fallen in love with the story. I wanted to be there with Danni, to offer hugs and support, and Beau? Well I just fell more and more in love with him as the story went on. He is one hot rocker! Not only does he know just how to please a woman, but his heart is so big and so full of love, he’s just a dream come true.

Of course it wouldn’t be a Bad Blooded Rebel story without plenty of appearances by all the other band members and the girls. Their conversations are fun, amusing and just so enjoyable to read, and their stories continue to develop throughout the book. I know deep down who my favorite BBR is, but I can say I have fallen for all of them. They all treat their women right and their intentions are all good. Yes, even Jude’s got a soft side. ☺

Mellie George has written a true gem with Reckless Redemption. I’ve loved every book she’s written, but I honestly believe this is her finest work yet. Her writing style is flawless; the story flows beautifully and captures everything the characters are going through in a truly enjoyable way. It is clear that she has put her heart and soul into this story, and really isn’t that what being an author is all about?

Thank you from the bottom of my heart, Mellie George, for bringing these hot rockers to life and for giving Danni and Beau the chance to tell their story. I cannot wait for more!

Just because we can, and because it is on sale this month, we also wanted to feature Say Yes, Mellie George’s first work!

Lilly Harrington was living the life of her dreams and making a name for herself as a top chef at a famous restaurant in San Francisco. She thought she had gotten everything she ever wanted until she went back to her home town of Glenbrook, Georgia for her youngest sister’s wedding over the Christmas holiday. Lilly soon finds herself faced with Luke, her first love that she ran away from the night before she left for college…who was now the best man in her sister’s wedding. Being around him immediately awakens feelings she thought long gone, and it’s making her second guess all of her choices. What do you do when your head and heart are pulling you in two different directions?

So for those of you who don’t already know this, I am a HUGE fan of Mellie George. I love her Bad Blooded Rebel series with all the hot rockers. So when I realized she had written her debut novel a year ago, the first in a different series, I had to give it a try. And I am so glad I did!

Say Yes (Book #1, Glenbrook Girls series) is a wonderful, feel-good love story. The kind that makes you smile and feel all warm inside. I fell in love with the characters from the very beginning; Lilly Harrington, a famous chef in California returns home to small-town Georgia for her sister’s wedding and some much needed R&R. She gets more than she planned when she runs into an old friend, Luke Beckett and sparks fly as memories resurface.

In addition to the main characters there are plenty of supporting characters that I really enjoyed meeting. They’ve all got great personalities and I’m hoping the author will consider giving them their own stories in the future.

What I loved about Say Yes is that it is not riddled with drama for the sake of drama. In fact drama is minimal in this story, which is a refreshing change from a lot of romance books out there. There is plenty of emotion, I did shed a few tears, but I also laughed at times. When the story ended it left me in a wake of happiness, although I didn’t actually want to reach the end and say goodbye to Luke and Lilly.

Another fabulous story from the amazing Mellie George! Thank you for bringing these characters to life and I hope to see more of them in the future.