I loved this book! If you haven’t you need to one click it now!! I promise you can’t go wrong!

He’s hot, young, and way off-limits… But he might be just what she needs to get over the past and on with her life.

Lisa Taylor’s life stalled after her divorce three years ago, and she never got it started up again. Now her shit-paying catalogue photography job is boring her to death, she can’t bear to look in the mirror, and she hasn’t had a man since her asshole ex left.

When a gorgeous younger man reappears in her life, he promises to be the solution to all those problems. Tempting as he is — and god almighty, he is! — taking what he offers could destroy what little she has left. 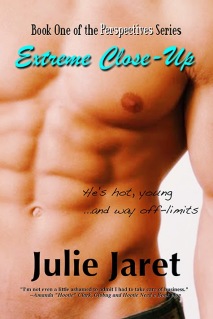 Lisa backed off, making sure to get more than an arm’s length from him.  “Braden, I’m sorry, but I’m not interested in you that way.”

He relaxed against the counter, crossed his arms and gave her a pointed look.  “I thought we didn’t bullshit each other.”  A small smile softened the words.  “I’m not ashamed to admit I want you.  Why pretend you don’t feel the same?”

Ignoring the rush of wet lust in her panties, she insisted, “I’ll admit you’re very attractive, but that doesn’t mean I want you like that.”

“With all due respect, Ms. Taylor, your eyes and your body say you do.”

“Pardon me?”  She wouldn’t have responded had she not been so totally caught off-guard by his comment.

“Your pupils are dilated; you’re breathing like you just ran up the stairs; your cheeks are flushed; and…”  His own darkened eyes dipped down to her breasts.

She didn’t have to look to know her nipples were hard.  And now they tightened even more for him, the traitors.  Humiliated, she crossed her arms over her chest.  “I’m not having this conversation.”

“There’s nothing to be embarrassed about, it’s just your body’s involuntary response to certain stimuli.  It’s physiology.  Happens to everyone.”  Before she could interrupt, he asked, “Do you remember at the lake house once, about ten years ago, I pitched a fit and ruined the whole day?”

“And what’s that got to do with my wanting to crawl under a rock and die right now?”

“I’m thinking of one tantrum in particular.  My dad was giving me shit because I had a hard-on, which, of course was my body’s involuntary response to certain stimuli.  It happened a lot back then, and dad never missed an opportunity to call me out on it.”

“That day, the stimulus occurred when Jake was grabbing at you, trying to get you to pick him up.  Your bikini top slipped for a second, and I got my first glimpse of a nipple.”

“Oh god,” She gasped from a mixture of embarrassment and something else.

“Five minutes later, dad caught me starching a sock and decided to be a complete dick about it.”

“I’m sorry,” she winced.  “For what it’s worth, though, I appreciate your telling me.  Nobody’s ever starched a sock in my honor before.”

He laughed at her.  “Yeah they have, trust me.”

Lisa felt her face flush.  “Oh.  Well, no one else ever told me about it.”

“Maybe no one else has been out of his skull in lust with you for half his life.”  He took a deep breath at the same moment Lisa lost all ability to breathe.

“Braden, I’m beyond flattered, but there’s Jake… and everything else.  You know this can’t happen.”

His eyes and voice were dark as sin as he inched closer, “I know we’re both adults, both single.  I know I’m dying to touch you.  I know I can make you feel good.”

“Are you trying to kill me?” she whispered. 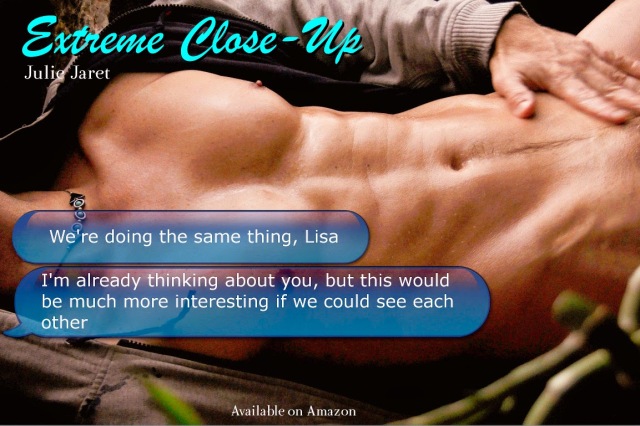 Julie Jaret is an American screenwriter with one feature film produced and some others on deck. Her alter-ego needed an outlet, so here we are.

Julie lives in the southeast U.S. with her sexy and supportive husband, two funny and beautiful kids, and one big doofus of a dog. She enjoys living vicariously through her fictional characters, often to the point of distraction… (Luckily, her hubby and kids know not to expect dinner at a certain time. Or at all.)

One thought on “Totally loved this book! Extreme Close-Up by Julie Jaret”