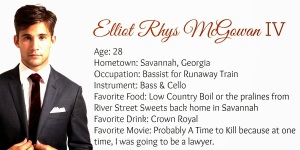 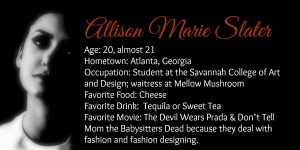 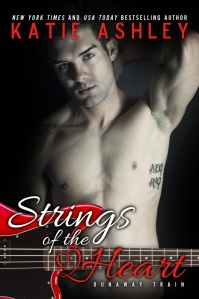 I really love Katie Ashley’s work. The first book in the Runaway Train series, Music of the Heart, even inspired me to find a special way to say I love you to my oldest son, and later it inspired a tattoo that I love. I loved Jake’s reformed bad boy ways, and Abby is a sweet spitfire that changed his ways. In Beat of the Heart, AJ, ah AJ, is funny, crazy, and a player himself. He meets Mia though and its all over. That brings us to Rhys, in Strings of the Heart.

Rhys is not portrayed as much of a player as his buddies and band mates. I feel that because of his upbringing he is more restrained. Allison, Jake’s little sister has always loved him. When it happens that they both end up in Savannah they hang out. One night of drinking was all it took for them to turn to each other. Then they both end up on the tour and Rhys is a jerk. Eventually he figures it out but in doing so he hurts Allison over and over. Its no surprise really that he does, he never was loved by his family, the only love really in his life was his band mates, and men generally are not good at showing their feelings. Eventually he gets it together but its almost too late.

I liked that Allison, while having always been in love with Rhys, is willing to walk away. That takes strength and self perseverance. While I did not love Rhys as much a Jake (and really its not Rhys fault), I still really enjoyed this book. Loved seeing the other couples on the bus, and the kids too.

I highly recommend Strings of the Heart. You will enjoy it, of that I am sure!
4.5 stars from me! I was gifted an advance copy from the author but still bought a copy as well.

Title: Strings of the Heart

Twenty year old, Allison Slater has been in love with her brother’s bandmate, Rhys

McGowan, since she was fifteen years old. But to him, she’ll always be Jake’s little sister

and off limits. Now a college sophomore and licking her wounds from a bad breakup,

she sets her sights on making Rhys see her as someone he could date…maybe even love.

college. But the night she’s dreamed of turns to heart-break, and she realizes she’ll never

be the one for Rhys.

For Rhys McGowan, his nightmare began when he woke up, naked and hung-over,

next to his bandmate’s little sister. Unable to remember a thing from the previous night,

he only makes matters worse by lying to Allison about not being interested in her. The

truth is he’s spent the last year to ignore his body’s reaction whenever Allison is around.

His resolve is tested when Allison comes on tour with Runaway Train, as both Jake and

Abby’s nanny and to fulfill her fashion design internship. The more time he spends with

her in the close quarters of the bus, the harder it is for him to resist.

it means that he has to fight his best friend for a chance?

Pulling away, I stared into her face. “God you’re so fucking beautiful,” I

She fluttered her eyelashes prettily at me. “Do you really mean that?”

“I would say it was the tequila talking, but I think my wood would prove me

As her arms came to encircle my neck, she pressed herself against me. “I don’t want

it to be the tequila talking. I want it to be what you feel deep down inside.”

I stared into her eyes, which held such vulnerability. “You like me, don’t you?”

With a solemn expression, she nodded her head. “I always have, and I always will,”

of The Proposition. She lives outside of Atlanta, Georgia with her two very spoiled dogs

and one outnumbered cat. She has a slight obsession with Pinterest, The Golden Girls,

English until she left to write full time in December 2012.